Rev. Burfoot S. "Buddy" Ward, III has been the Senior Pastor of the North Warren Presbyterian Church since September of 1997.  A graduate of Old Dominion University in Norfolk, VA with a Bachelor of Arts degree in Sociology and Anthropology, Rev. Ward worked in the business sector as a retail store manager before going to Gordon-Conwell Theological Seminary where he received his Master of Divinity degree in May of 1985.  Before arriving in North Warren, Rev. Ward pastored churches in West Gloucester, MA, Wells Tannery, PA, and Nottingham, PA.

Buddy married his wife Anne in May of 1980.  Together they have three grown children, Deborah, Burt, and Joshua.  He has been actively involved in many different areas of service in and around Warren County serving on the board of the Faith Inn, Secretary and President of the Warren Area Ministerial Association, Moderator of the Presbytery of Lake Erie, and Commissioner to the 2008 General Assembly of the PCUSA.  Presently he serves as the President of the Pregnancy Support Center of Warren County and he sits on the Administrative Committee of the Presbytery of Lake Erie.  Buddy likes "tinkering" with computers, music, and working out at the YMCA.  Contact him at buddy@nwpchurch.org 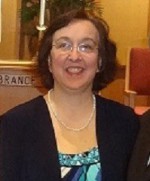 Anne Ward is in charge of our Youth Program.

Anne is the wife of Buddy, and has served as our Youth Director since 2007.  Anne has a Bachelor of Science degree in Elementary Education and works as a Substitute Teacher for the Warren County School District. As part of her duties as Youth Director, Anne oversees the weekly community youth recreation in our community center, youth group meetings, Club 456 meetings, the annual 30 Hour Famine, and youth mission trips.  Anne is an avid reader, and she enjoys cycling and aerobics.

Kathy Whittemore has been our church treasurer for over two years.  She is an active Ruling Elder on Session and co-chairs our Social/Missional Outreach Committee.   Kathy has an Associates degree in Accounting from Jamestown Community College.  She considers herself a late bloomer since she didn't get her GED until 2005.  She enjoys family and friends and her many grandchildren.

Please call ahead to set up a time to visit.